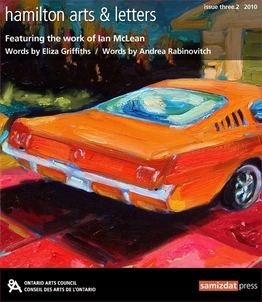 If you are a child of the sixties, you will recognize the colours, patterns and shapes that formed your aesthetic value; if you are not, you can still acknowledge the ironic and often sinister meaning of the seemingly ordinary.
In Ian McLean's latest series entitled "Yards and Muscle Cars", McLean once again delves into the possessions and architectural signifiers that tell the story of our psychological pathologies.
Using the confines of suburbia, intimating the 2.5 children within the ranch style bungalows and split levels with pristine yards, McLean makes comment on the illusion of security that lifestyle implies.  In past series, he has dealt with interiors.  In "Yards and Muscle Cars", exteriors are examined with metaphoric glee enabling us to search for the meaning in our own consumption.
Stylistically impressionistic in richly hued colours, the use of the sharply delineated pristine swimming pool in many of the paintings suggest nature controlled, confined within a very strict order that is considered a status symbol we all subscribe to.  Like the Hockney pools of the late sixties, they are used as a compositional tool to describe a place, both real and metaphorically inherent in us hapless humans, but also to consider the nature of water contained.
In "Something in the Water", an outline of a woman, weight shifted on one hip in a stature of consideration, holding a cocktail and looking through the glass doors from the inside at the swimming pool where a man is floating face downin the water outside, is overlayed with blue/green design like a sixties-era Pucci dress accessorizing a potentially horrific story.  Is the man dead and floating while the woman calmly watches?  Or is the man merely feeling the weightlessness of suspension while the woman looks on in judgment?  Either way, the man and woman are engaged in a distant interaction living lives separated by glass and water: translucent roadblocks.
The hot muscle cars in vivid colour, both intact and bashed up and parked outside the homes, suggest the abandon of youth; less a metaphor for escape, but rather a status symbol associated with an age of carefree innocence and swagger.
A 1974 Corvette in rich, deep yellow is juxtaposed against a Virgin Mary statue perched on the strip of lawn beside the driveway but behind the car.  She is much smaller than the brash car but her message of moral rightness and the guilt associated with it keeps the vehicle firmly placed in its spot.  All that power in that big engine is curtailed by the ever vigilant presence.  A red/orange/pick sky and the field-of-mustard coloured driveway lend a jolt of comic book sensibility pointing to a pop art irony.  Entitled "Sweet Mother of God!", McLean's sense of humour shines.
In "A Really Good Fire" a large two storey house reflects an almost out of control fire in a fire pit in its windows.  Night time, the house seems to hover both attracted and repelled by the force of nature that is contained but scarily close.  A small rectangle of blue attached to the house will not douse the passion of the flame.  Two empty chairs circle the fire, evidence of the people who had enjoyed its heat and mesmerizing attraction but they are no longer there.  Are they asleep in the house with danger looming?  Or have they left, personifying the objects?  Like a dreamscape. the potential for danger speaks to a deeply buried lack of trust.  If the house is a metaphor for nurturing protection and safety, an almost maternal presence, then this painting suggests that what lies within is not what it appears to be.
Our past informs our present and leads us to the future.  A sense of memory and the now meld in this series with intense colour, strong design and thoughtful statement.  McLean allows us to question our own relationships to our material world, question how intrinsic it is to our identity and ultimately, to our destiny.